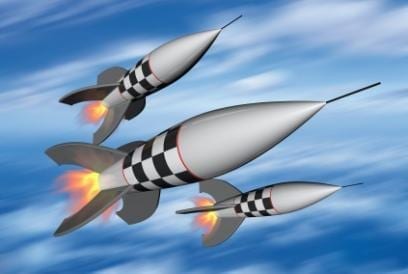 The US Federal Reserve continues to hike interest rates, dancing around the delicate line between curbing demand enough to tame inflation while steering clear of curbing demand too much, plunging the US and with it much of the developed world into a recession.

As expected, the US Fed hiked interest rates another 0.75%, with an end point elevated to 4.26% by March of 2023. Analysts and investors alike appear to have lost confidence in the Fed’s actions. The notion of a “soft landing” where inflation will be tamed without plunging the US economy into a recession now appears to be wishful thinking.

US markets exert major influence over equity markets around the world. On the final trading day of the week, the US Dow Jones Industrial Average (DJIA) hit a new 52 week low in intraday trading. From the US financial website cnbc.com:

While investors are “voting with their feet” with unabated selling, influential market analysts are adding to the gloom.

International investment banking powerhouse Goldman Sachs lowered its end-of-year target for the US S&P 500 Index from 4,300 to 3,600. In Goldman’s view the outlook for interest rate rises has shifted to near certainty rates will continue to rise and will likely force a recession.

Add to the mix of signs of an impending recession in the US the bond market. Under normal conditions, the yield of two year US bonds will be lower than the yield on 10 year bonds. The yield curve there is now “inverted,” meaning the 2 Year Yield is higher than the 10 Year, a historically reliable predictor of a coming recession. In the last forty years every US recession was preceded by an inverted yield curve.

Australia was the only economy in the developed world to avoid a recession in the GFC (Great Financial Crisis) before experiencing our first recession since 1991 in the post COVID 19 Pandemic period. The yield curve here is not inverted, suggesting bond investors have faith in the RBA’s ability to combat inflation without excessively raising interest rates. Some experts warn the recession risk here is real, given the dramatic difference between property mortgages here and in the US.

For many Aussie investors continued declines in the ASX are of higher concern than a recession. Even if Australia is spared a recession, the ASX is most likely to suffer in tandem with US markets.

Investors who see opportunity in declining markets often seek relative safety in “defensive” sectors or individual stocks. At the forefront of defensive sectors lie defence and security stocks as governments rarely curtail military and defence spending under any circumstances.

The problem Aussie investors have is the lack of a robust defence industry on the ASX. All the major US players have Australian operations and all are benefiting from a move to increase defense spending around the world in the face of threats from Russia and possibly China.

General Dynamics recently booked a $1.1 billion dollar order for 250 Abram tanks from Poland. Germany purchased Chinook helicopters from US based Boeing. Lockheed grabbed a $4.4 billion dollar deal to supply up to 255 Blackhawk Helicopters to the US and other foreign military sales customers (FMS). Bloomberg.com is telling us defence stocks have another tailwind at the back – rising military threats. 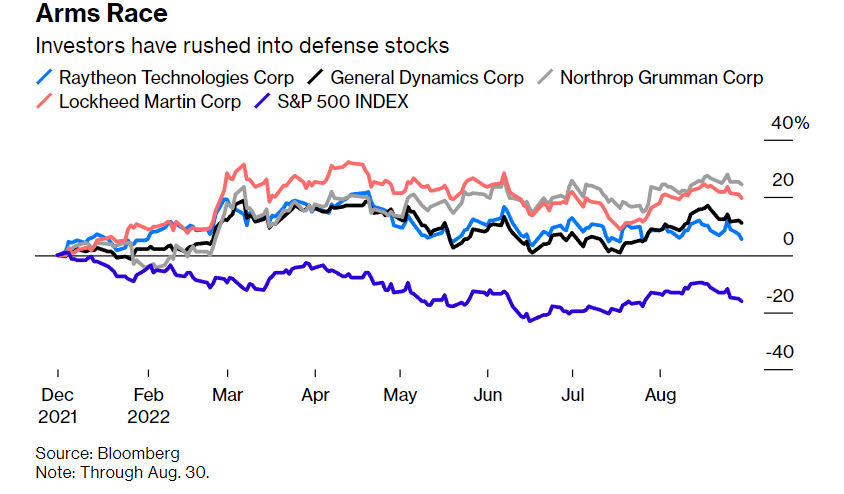 Austal has built numerous smaller vessels for the US Navy and the US Coast Guard. With the share price languishing in mediocrity through the first half of calendar year 2022, investors rushed in with “BUY” orders on the 30 June news Austal had secured yet another contract with the US Coast Guard – a USD$3.3 billion dollar contract for 11 OPC vessels (Offshore Patrol Cutters) with construction to begin in 2023.

The company also builds commercial passenger and vehicle ferries. Austal shipbuilding expertise is supplemented by the company’s high-tech vessel control and information management systems. In addition to its coastal patrol boats Austal builds surface combat ships (frigate sized as in the US Navy’s LCS vessels (littoral combat ship); and high speed military transport vessels as in the EPF (expeditionary fast transport) vessels for the US Navy.

The company has five shipbuilding facilities here in Australia, in the US, in the Philippines, and in Vietnam along with eight service centres for maintenance.

Bisalloy Steel makes steel plating – tempered, high-strength, and abrasion resistant. The company’s steel is used in structural applications as well as for the kind of armoring and wear resistance needed for military applications.

Bisalloy is global in scope. The protection steel product line is in use for land-based and sea-based patrol vehicles as well as in light-armoured military vehicles.

Electro Optics Systems Holdings is a high-tech company with promise that to date has sorely disappointed. The company has expanded into three distinct operating segments –defence, space, and communications – with a major acquisition of a satellite communications company in 2020 enhancing the company’s reach in both the space and communications sector.

The news of that satellite company pushed the share price to an all-time high on 28 January of 2020, with the share price in free fall ever since as costs grew as did revenues, but consistent profitability remained elusive amidst massive negative cash flow. Full Year 2019 Financial Results were wildly positive, with the share price up around 200% in 2019 prior to the crash. Share dilution became an issue as the company sought to raise capital to fund its far-reaching and expensive growth initiatives.

In today’s world it is the company’s defence sector that could breathe life back into the share price, now trading near all-time lows. The company makes mobile and stationary weapons platforms operated remotely from within the platform, eliminating the need for an exposed operator.

Both the Chief Financial Officer (CFO) and the Chief Executive Officer (CEO) and founder resigned in 2020 and the company is in the midst of a strategic review. The number one item in the latest progress review released on 8 September was to immediately stop the “cash drain” into non-profitable business operations.

The company has three core C-UAS platforms. A handheld unit can be used at field level to detect and target threats. On-the-move platforms are vehicle mounted for more rapid threat detection and response. Finally, DroneShield offers a fixed-base platform for longer range protection and perimeter security.

Specific C-UAS products begin with DroneGun Tactical, a gun shaped hand held unit that will disrupt a drone in flight, forcing it to land or return to its starting point, and its newer companion DroneGun MKIII. DroneSentry-X is the vehicular mounted product and DroneSentry is the fixed mounted offering.

On 1 September, the company received a $2 million dollar order for DroneSentry from a European customer, the largest European order to date. This followed the 28 August news of the sale of a DroneSentry fixed system at a major US airport, the first installation of its kind in the US.

In a July Investor Presentation the company announced its sales pipeline for the rest of 2022 was $125 million dollars, with $230 million already in the pipeline for 2023. 2022 sales were driven by Ukraine Aid contracts and defence, intelligence, homeland security and airport contracts in the US and other NATO countries.

The share price hit its 52 Week Low of $0.17 on 24 February and has been in a near constant upward trend since, marked by multiple announcements of product sales, and a capital raise to grow the company. Investors apparently were impressed with the company’s release of its Strategic Review’s restructuring plan with an increased focus on sales and cost savings.

Xtek has announced eleven new orders since the February release of the Strategic Review, with the largest being a $33 million dollar contract with the US government.

Unlike far too many “restructuring” plans, the Xtek initiative yielded some results. In the company’s’ Full Year 2022 Financial Results revenues rose 105% and underlying net profit erased an FY 2021 loss of $4million dollars into an FY 2022 profit of $8.2 million dollars.

Quickstep Holdings (QHL) makes some of the lists of ASX defence stocks because the company’s carbon fibre technology for creating custom composite components got the company contracts with Northrup Grumman and other companies to produce component parts for the F-35 Lightning II fighter plane The company is focused on any business sector in need of additive manufacturing, which Quickstep’s technology offers. Aerospace and automotive companies are also prime customers. The company’s market cap is $30 million dollars and last traded at $0.42 per share.