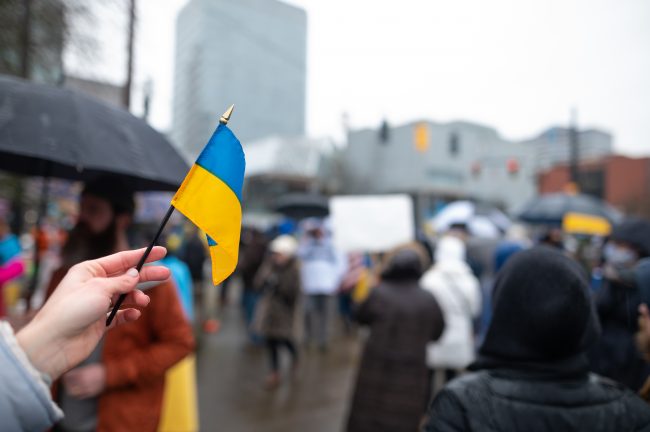 Offices closed or destroyed, seven-hour lines at ATMs, employees who have joined Ukraine’s armed forces, and threats of Russian occupiers forcing credit union leaders to transfer money – these are the things Ukraine’s credit union community is facing amid the war, as described in a podcast episode released Thursday by the World Council of Credit Unions.

In episode 11 of WOCCU’s Global Credit Union Podcast, WOCCU Director of Communications Greg Neumann spoke to a credit union liaison referred to as “Aleksandr,” which is not his real name (his identity was concealed due to safety concerns). Having recently fled Eastern Ukraine to stay with friends in the Western region of the country, Aleksandr shared that more than 20 credit unions are located in areas of active war; most credit union facilities are closed, some have been destroyed, and many Ukrainian credit union members have likely lost their homes and/or lives. Like many civilians who lived peaceful, perhaps mundane lives just a month ago, some employees of credit unions are now a part of Ukraine’s armed forces.

And for credit unions located in Russian soldier-occupied areas of the country, there are serious threats of financial losses. “Cases of looting have become more frequent, which poses an additional risk to credit unions, and their leaders, because now their occupiers can force leaders to transfer money from bank accounts to anywhere,” Aleksandr said.

Access to information is limited, as occupiers have turned off Ukrainian TV stations and mobile communications in some areas, and internet connections are weak, he said. That means there are virtually no cashless payments in those areas, and arranging cash deliveries to ATMs is impossible; civilians often stand in ATM lines for five to seven hours hoping to withdraw some cash for food, according to Alexsandr.

He noted one credit union is located in Enerhodar, Ukraine – close to the Russian-seized Zaporizhzhia Nuclear Power Station. “There, we’re all aware of consequences of even the smallest damage to a nuclear reactor. It is real, real horror for credit unions and members in that city,” he said.

Amid the terror unfolding each day in Ukraine, the two credit union associations – the United National Association of Savings and Credit Unions (UNASCU) and the All-Ukrainian Association of Credit Unions (VAKS) – have been working together to advise the country’s credit unions and advocate on behalf of them. Alexsandr explained that in the early days of the war, the National Bank of Ukraine (NBU), which is the regulator for the country’s banks and credit unions, provided refinancing support for banks to help address liquidity concerns.

As per the current law, credit unions were not included in this relief effort; however, they may have been had the war started just weeks later. A Draft Law on Credit Unions, which would, among other things, allow credit unions the same financial relief that banks were granted when the war began, was expected to be passed in the coming weeks by the Ukrainian Parliament. The draft law was still being amended when the war began, and the final text that would be voted on during a second reading has yet to be published, according to WOCCU.

Alexsandr said UNASCU and VAKS submitted a letter to the NBU requesting credit unions be added to the relief mechanism immediately. In an English version of the letter shared with CU Times, the groups asked the NBU to offer credit unions credit lines up to 30% of their account holders’ balances to support the institutions’ liquidity, just as the regulator did for banks in a Feb. 24, 2022 resolution.

The NBU has supported credit unions by issuing new regulations under martial law, among them allowing credit unions to not pay out deposits under their term deposit agreements and interest accrued until their due date. In addition, the NBU adjusted deadlines for reporting, and allowed for the termination of inspections and a moratorium on sanctions including sanctions for non-compliance with financial ratios, as well as the need to revise the financial ratios as such, according to a March 4 post from UNASCU on WOCCU’s website.

Alexsandr said most credit unions stopped making loans when the war began due to liquidity concerns; however United Credit Union of UNASCU has continued lending, having just made two loans under the Worldwide Foundation for Credit Unions’ Liquidity Fund, according to UNASCU’s post.

The Worldwide Foundation established the Ukrainian Credit Union Displacement Fund just after the invasion began, to which a number of credit unions have contributed, and announced its first distribution of $50,000 to a humanitarian aid organization earlier this week.

Despite the dire nature of the situation in his country, Alexsandr expressed hope during the podcast interview. He said credit unions located on safer terrain in Western Ukraine immediately joined efforts to provide aid for incoming migrants, and that they’re ready to start lending again, especially with the agricultural season about to begin.

“This week, the Ukrainian president appealed for all entrepreneurs and institutions of Western Ukraine to resume work, and help set up productions for entrepreneurs who have moved from the east and can resume work in the west,” he said. “Credit unions could join in the recovery of the local economy and the development of small businesses.”