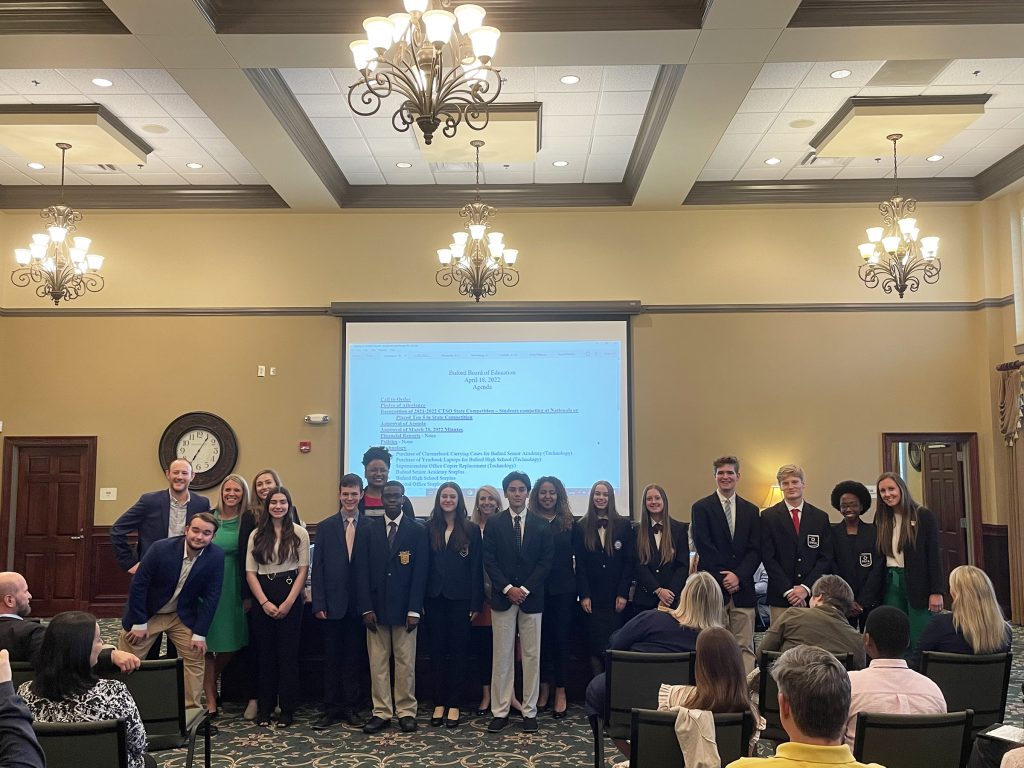 At its meeting Monday, April 18, the Buford Board of Education recognized students who placed in the top five in the state for their Career and Technical Student Organization events, some of whom will go on to national competitions.

“I don’t know of any other school system that so generously supports our students going to the national competitions,” said Jennifer Woods, director of Career and Technical Education for Buford City Schools.

Between Buford Middle and Buford High School, 19 students were recognized for placing in their events, and a number of them will continue on to compete against thousands of other students at the national competitions as far away as Nashville, Chicago and even San Diego this summer.

Later in the meeting, Buford Middle School principal Keith Johnson stood to give his monthly report to the board but instead handed the responsibility off to sixth graders Maria Carolina Panosso and Jean Claude Luemba.

Panosso and Luemba are both students in Ms. Anna Misley’s English as a second language course at the middle school, and after delivering the principal’s report flawlessly, the room erupted in applause in recognition of the students’ efforts and courage.

Panosso is from Brazil, and although she had some knowledge of English before moving to Buford for her sixth grade year, she was much more comfortable speaking her native Portuguese.

Luemba moved to Buford in third grade from the Democratic Republic of the Congo, and he joked that upon arriving, the only English he knew was, “I don’t know English.”

“It takes so much courage to do what they did, and I’m just so proud that they were able to do that,”  Misley said after the meeting. “We practiced standing up and introducing ourselves to the principal. I think that’s when Mr. Johnson had this idea.”

The board also approved the purchase and surplus of a variety of technology and equipment necessary for maintaining the school system’s functionality, including a new copier for the superintendent’s office and recoating all of the gym floors.

Board members also approved a number of field trip requests, many of which pertained to the CTSO national competitions this summer, as well as the BHS band traveling to London to participate in the New Year’s Day parade at the end of 2023.

Superintendent Melanie Reed then gave her report, which included announcing an optional four-day work week for 12-month employees during June and July, as well as the introduction of the Orton Gillingham Instructional Phonics program into the curriculum to help improve literacy.

The Buford Board of Education’s next meeting will be held at 7 p.m. Monday, May 16, at the central office, 2625 Sawnee Ave. in Buford.