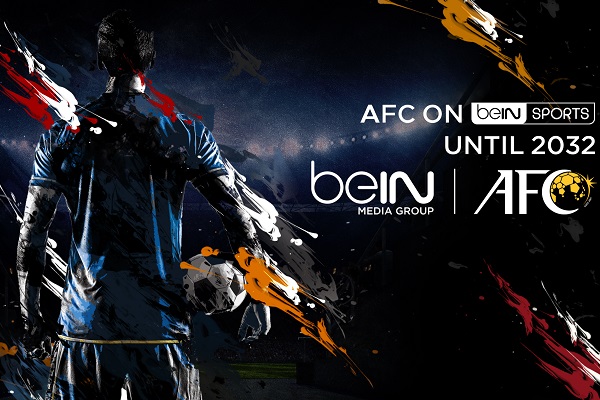 The multi-year rights deal includes the remaining fixtures of both the ongoing AFC Champions League 2022 and AFC Cup 2022 up to 2032.

Through this partnership between AFC and beIN, which originally dates back to 2010, beIN Sports will showcase the new AFC rights on its four dedicated AFC channels, which will all allow concurrent viewing of games. Every AFC broadcast on beIN features the best-in-class studio analysis presented by beIN’s top punditry team using beIN’s state-of-the-art studio facilities and technology.

The AFC rights will be available across all beIN’s subscription packages and add to beIN Sports portfolio across the MENA region, which also includes exclusive rights to the FIFA World Cup Qatar 2022, the English Premier League, UEFA Champions League, UEFA Europa League, UEFA Conference League, LaLiga, Ligue 1, Bundesliga, the FA Cup, and a multitude of other sports rights and entertainment offerings.

Commenting on the deal, CEO of beIN Media Group, Yousef Al-Obaidly, said: “We are delighted to enter this long-term partnership with the Asian Football Confederation up to 2032. It is a hugely significant deal for beIN and our business, showing our complete commitment both to premium rights and to the long-term. The FIFA World Cup Qatar 2022 later this year is simply the beginning of our plans at beIN, and this deal is just one proof point of that.

“The AFC rights add to our unparalleled suite of major sports and entertainment rights within our portfolio over the coming decade. This new deal continues to firmly establish beIN as the home of sport and entertainment in MENA – both now and for decades to come. We look forward to being a trusted partner of Asian football across the entire region.”

AFC General Secretary Datuk Seri Windsor John, added: “The AFC is delighted to enter into this significant partnership with beIN, who has been a loyal partner of the Asian game since 2010. This long-term deal underlines not only the ever-growing stature of the AFC’s world-class competitions but also the confidence top broadcasters have in the future of Asian football, and for decades beIN has simply been best-in-class in this region.

“MENA is home to some of the most ardent supporters of Asian football and we are pleased to be able to grow the consumption of AFC football with the hundreds of millions of passionate fans across the MENA region.”