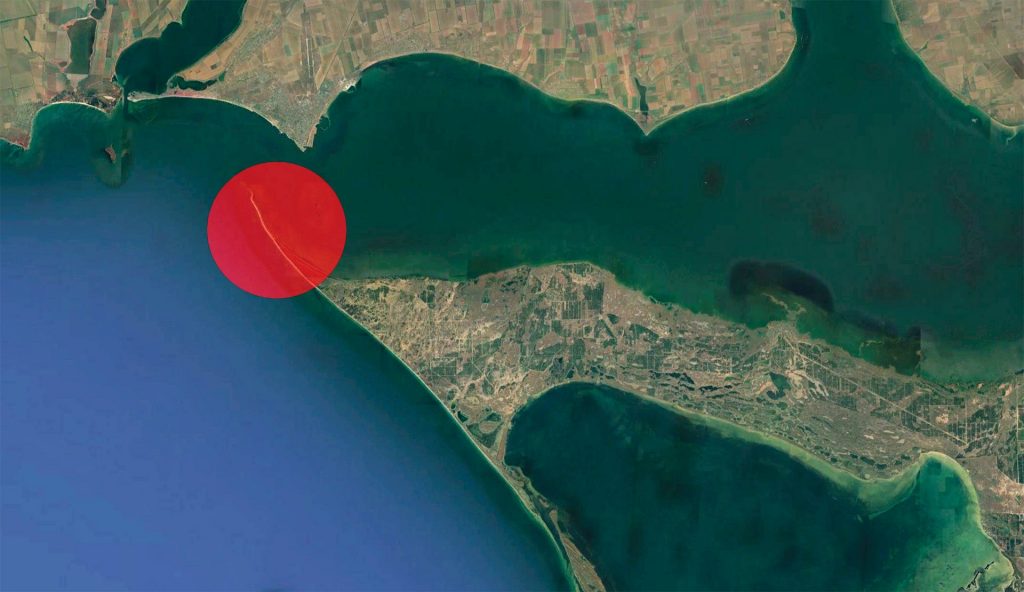 Ukrainian forces have recaptured much of the southern part of the country up to the Dnipro River and now a battle is underway to dislodge Russian troops from their last stronghold in Mykolaiv Oblast.

Ukrainian troops are now fighting to liberate the Kinburn Spit, the tip of the narrow Kinburn Peninsula jutting into the Black Sea. It’s a strategic chokepoint for both the Dnipro and South Bug rivers, controlling access to the key ports of Kherson City and Mykolaiv respectively.

It’s also located just two miles away from the port of Ochakiv, the eastern-most Black Sea port still held by Ukraine. Russian forces have used the Kinburn Spit to routinely conduct missile and artillery strikes on Ukrainian positions there, as well as throughout southern Mykolaiv Oblast – including Mykolaiv City – and other areas along the Ukrainian-controlled Black Sea Coast, according to the Institute for the Study of War (ISW).

“The Kinburn Spit is also out of the 25km range of 152mm artillery that Russian forces have accumulated on the left (east) bank of the Dnipro River in Kherson Oblast,” according to ISW. “Control of the Kinburn Spit would allow Ukrainian forces to relieve Russian strikes on the Ukrainian-controlled Black Sea coast, increase naval activity in the area, and conduct potential operations to cross to the left (east) bank in Kherson Oblast under significantly less Russian artillery fire compared to a crossing of the Dnipro River.”

Ukraine is being careful in how much information it is providing about the operation.

“The most important thing is that the operation continues and we continue the fight against the enemy,” Nataliya Humenyuk, spokesperson for Ukraine’s Operational Command South, told the Ukrainian Espreso TV station on Tuesday.  “We must be aware that premature reports about the…disappearance of the enemy from there can significantly harm Mykolaiv, which has breathed a little in connection with the de-occupation of large areas and pushing the enemy to a great distance. But this distance can be critical and [the enemy can] return fire.”

“The sea helps us,” she said. “The enemy cannot gain a foothold there because the Armed Forces inflict damage on the enemy’s points.”

Another factor in Ukraine’s favor, she added, is the lack of places for Russian troops to hide.

“The spit does not provide for the location of a large number of buildings where it is possible to gain a foothold and hold on,” she said. “We allow only the storm to make noise, and everyone to observe silence.”

In addition to being a key chokepoint, the Kinburn Spit, along with Russia’s presence on the east bank of the Dnipro River, “allows the enemy to raise reserves,” Humenyuk said.

Vitaliy Kim, the governor of Mykoliav Oblast, said on his Facebook page that there are three settlements on the spit still to be liberated.

As Ukrainian forces attacked the Kinburn Spit, they also launched yet another drone strike on Sevastopol, home of Russia’s Black Sea Fleet, which you can read more about here. While it remains to be seen how effective either operation is, one thing is clear. Ukraine has its eyes on Crimea.

A significant Ukrainian advance on the Kinburn Peninsula would put its forces across the Dnipro River, about 100 miles northwest of Crimea, which Ukrainian officials have vowed to liberate after more than eight years of occupation by Russia. That could help them bypass some of the defensive positions Russia has been building up as it retreated east of the Dnipro.

Ukraine’s use of M142 High Mobility Artillery Rocket Systems, or HIMARS has Russians reworking logistic routes in Crimea, widening and improving the road of the Arabat Spit, a narrow, 70-mile-long body of land running along the eastern edge of the peninsula.

Occupation forces in Crimea, meanwhile, appear to be preparing for some kind of attack.

“Ukraine’s recapture this month of Kherson, a provincial capital to the north of Crimea, has revived longtime hopes of somehow regaining control of the Massachusetts-sized peninsula, which the government in Kyiv — and most of the world — still considers part of Ukraine,” the Los Angels Times reported.

Before heading into today’s news from Ukraine, The War Zone readers can get caught up on our previous rolling coverage here.

On the battlefield, the toughest fighting remains in the Donbas, where Russian forces continue an attempt to take the city of Bakhmut in the Donetsk Oblast. Here are some key takeaways from the latest assessment by the Institute for the Study of War.

In a Nov. 22 letter to Defense Secretary Lloyd Austin, “16 senators urged the administration to give Ukraine MQ-1C armed drones, or Gray Eagles, which are medium-altitude drones that can fly for more than 24 hours.”

The question of how effective MQ-1Cs would be in any capacity, and their outright vulnerability, has been raised repeatedly. Even Ukraine’s own pilots say they are not a good choice for the country.

As Ukraine braces for another inevitable wave of Russian attacks on its utility infrastructure, Ukrainian President Volodymyr Zelensky has launched a plan to set up thousands of centers across the country where residents can get heat, power, mobile communications, internet service, water, and first aid.

The “Points of Invincibility” project already has already prepared more than 4,000 such locations, Zelensky said Tuesday on his Telegram channel. More are planned.

“If massive Russian strikes take place again and if there is an understanding that the electricity supply cannot be restored within hours, the work of ‘Points of Invincibility’ will be activated,” said Zelensky. Those centers will be located at all regional and district administration offices, as well as schools, State Emergency Services buildings and elsewhere.

A special website, nezlamnist.gov.ua, with a map of such points throughout the country is already available and is constantly updated. It will also contain information about the nearest operating gas stations, banks, pharmacies and grocery stores.

“All of us must be prepared for any scenario, considering what terrorists are fighting against our people and what they are trying to do,” said Zelensky. “I am sure: by helping each other, we will all be able to get through this winter together.”

Japan has also launched an effort to help Ukrainians survive the winter, with plans to send $2.7 million worth of generators and solar lamps.

Speaking of weather, mud remains a foe to both sides in this conflict.

With everything else going on in Ukraine, there hasn’t been as much attention paid lately to the Kharkiv Oblast, where Ukraine launched a successful counteroffensive. Earlier this week, Ukrainian troops raised the nation’s blue and yellow flag on the border with Russia.

Still, the fighting there remains heavy, with Ukrainian forces repelling more than 100 frontal assaults around Yakolivka over the past five months.

Heavy fighting rages on in the east, with Ukrainian artillery pounding Russian targets.

Donetsk too remains a hot spot, with the Ukrainian National Guard dropping munitions from drones on enemy personnel and equipment.

Even Russian dug out positions were not safe from Ukrainian drones.

The Ukrainian Defense Ministry shared a video of a long column of armor, without providing a date or location.

It takes a special kind of fortitude to fly helicopters into a battle zone. So check out these Ukrainian Mi-8 Hips flying on a combat mission near Bakhmut.

And finally, “a military court in Moscow has sent a colonel from the General Staff of Russia’s Armed Forces to pretrial detention for two months on a charge of demanding a washing machine as a bribe from the chief of a local enlistment center responsible for the recruitment of soldiers for the ongoing war in Ukraine,” according to Radio Free Europe/Radio Free Liberty.

“Colonel Ivan Mertvishchev was detained as he received the household appliance from the officer, who had alerted the Federal Security Service (FSB) about the deal. Mertvishchev, who had threatened a bad review of the officer, faces up to 12 years in prison and a hefty fine.”

That’s it for now. We will update this story if there is anything major to add until our next new update is published.