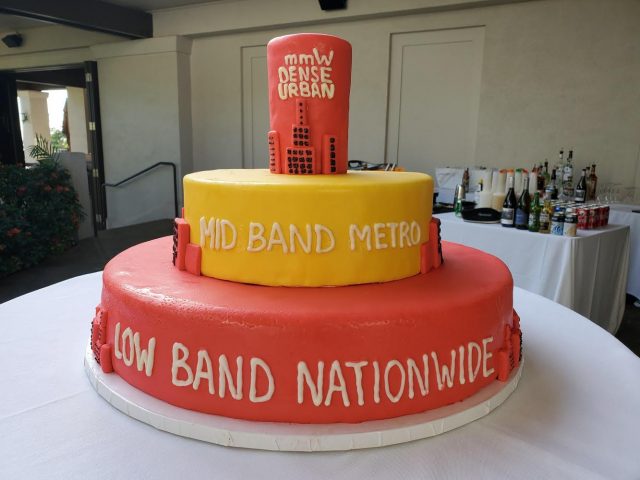 5G support arrived for Apple users with the iPhone 12 models in late 2020. But, as I noted in “The iPhone Gets 5G, but What’s It Like in Real-World Use?” (19 November 2020), the high-speed wireless data service’s performance differed dramatically depending on where you lived and which wireless carrier you used. At the time, T-Mobile was the best 5G carrier option for most people because of its comprehensive three-tier service:

Rival carriers AT&T and Verizon were at a major competitive disadvantage because they could provide only low-band 5G service nationwide, supplemented with high-band service in nooks and crannies of a few US cities. In the middle, neither AT&T nor Verizon could offer service because they lacked access to the necessary parts of the spectrum.

That changed on 19 January 2022 when AT&T and Verizon flipped the switch on C-band, which refers to a swath of radio airwaves in the mid-band spectrum, similar to those being used by T-Mobile. C-band support provides download speeds on the order of 1 gigabit per second under ideal conditions, though everyday performance is likely to be slower.

If C-band sounds familiar, it may be because you remember the days of large C-band satellite dishes that have now largely been replaced by smaller, fixed Ku-band dishes like those from Dish and DirecTV.

This new swath of spectrum has caused yet more controversy for 5G (see “Worried about 5G and Cancer? Here’s Why Wireless Networks Pose No Known Health Risk,” 6 December 2019). AT&T and Verizon have been tussling with the Federal Aviation Administration over the agency’s worries that the new wireless service might interfere with certain airplane altimeters that rely on similar spectrum. These concerns triggered delays in C-band deployment and more recently prompted the wireless carriers to hold off on activating some 5G towers near airports.

As a practical matter for iPhone users, this brouhaha has little effect on their ability to access C-band service. However, other factors might limit their access for a while.

How to Tap into C-band

On the hardware front, the news is all good. If your device supports 5G, it can tap into AT&T and Verizon’s mid-band spectrum, along with their low-band and (if you are precisely in the right urban location) high-band services.

However, you need the right wireless plan. That’s not an issue for AT&T users because the mid-band service is automatically available with any plan that offers 5G access at no extra charge. However, if you’re a Verizon user, check out the 5G Play More, 5G Do More and 5G Get More plans. Verizon’s entry-level 5G Start plan works with low-band but not mid- or high-band service.

To get C-band access, you also need to reside in the right location. That’s where Verizon and AT&T radically diverge at the moment:

Entities known as mobile virtual network operators (MVNOs), which piggyback on the wireless networks of traditional providers and resell their data service in a rebranded form, will presumably work with C-band.

I’ve confirmed that Comcast’s Xfinity Mobile, a major MVNO that uses Verizon’s network, supports C-band. On the AT&T side, Apple users have bragging rights since MVNOs will initially roll out C-band on iPhones but not Android phones, a spokesman told me. But MVNOs will still be hampered by AT&T’s limited C-band availability.

C-band is relevant not only to phone and tablet users but also to those who want high-speed home broadband service and are looking for alternatives to the traditional providers such as Comcast Xfinity, Charter Communications, and Lumen Technologies (formerly CenturyLink).

As with its 5G phone service, T-Mobile until recently had an edge in the 5G-based home broadband space (see “T-Mobile Offers Unlimited 5G Home Broadband Service,” 14 April 2021) with its 5G Home Internet. The service is broadly available within the carrier’s mid-band footprint—though not every home address therein qualifies—and provides download speeds similar to what the carrier’s phone customers see.

On the other hand, Verizon’s 5G Home service competes with T-Mobile’s 5G Home Internet but until recently had been at a big disadvantage. That’s because it relied on the carrier’s high-band service, which is available only in limited parts of about 80 US cities. Also problematic is the fact that high-band service functions better outdoors than indoors and is easily foiled by physical obstructions like light poles and tree leaves. This has made it the brunt of jokes.

Verizon is now expanding 5G Home support to the C-band, which will dramatically expand its reach and potentially improve the service’s reliability since the mid-band signal should work indoors as well as outdoors. I’m hoping to try out 5G Home and may have more to say about it later.

The T-Mobile and Verizon 5G home broadband offerings work basically in the same way—they offer a modem-like gadget that plugs into power, taps into 5G airwaves, and translates the cellular Internet connection into high-speed Wi-Fi for laptops, phones, and other devices in a home.

Inching into the Future

Much has been made—at least by the industry—of 5G’s potential to remake society by enabling gee-whiz technologies such as autonomous vehicles, remotely controlled medical procedures, vast sensor networks, and much-talked-about metaverse realms ( see “Understanding 5G, and Why It’s the Future (Not Present) for Mobile Communications,” 11 November 2020). It remains to be seen how much of this will come to pass, but the addition of C-band support by AT&T and Verizon goes a long way to providing speedy, widely available 5G to more iPhone and iPad users.