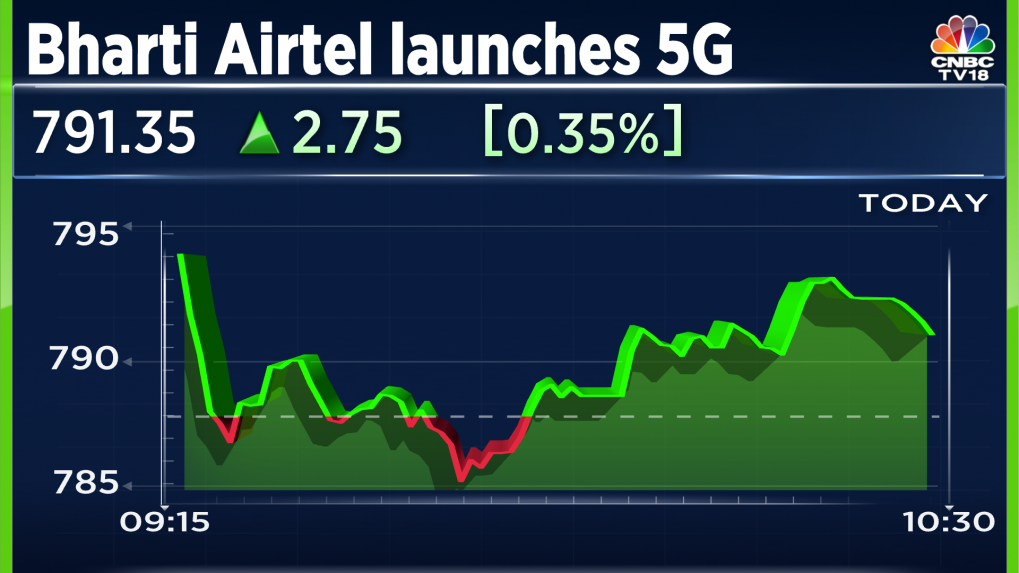 Bharti Airtel launched its 5G services in eight cities across India for which customers will have to pay as per their existing 4G plan. Morgan Stanley believes that 5G services for consumers could be priced competitively and that the industry might look to increase 4G base tariff.

Bharti Airtel launched its 5G services in eight cities across India for which customers will have to pay as per their existing 4G plan. Airtel subscribers in Delhi, Mumbai, Chennai, Bengaluru, Hyderabad, Siliguri, Nagpur and Varanasi will be able to use Airtel 5G Plus services in a phased manner, the company announced on Thursday.

Following the launch, Bharti Airtel shares traced their way back into the green territory in early deals but kept swinging to the red soon after on Friday. The stock was trading 0.5 percent higher from the previous close at Rs 792.65 on BSE at 10:29 am.

Global brokerage Morgan Stanley has an overweight stance on the company and expects a further 4.6 percent upside to Rs 825 per share in its shares from Thursday’s closing price.

MS believes that 5G services for consumers could be priced competitively and that the industry might look to increase 4G base tariff.

Meanwhile, Nepean Capital’s Gautam Trivedi believes Bharti Airtel is the only way to play in the telco space. “I wish Reliance Jio was listed. But that’s not going to happen until the company takes a call on that. The other alternative is Vodafone and that’s obviously a very high beta bet if somebody does want to take it,” he told CNBC-TV18 on Thursday.

Last week, CLSA said India mobile has been consolidating with Reliance Jio and Bharti Airtel controlling a dominant 76 percent of the combined sector revenue share. So it expects 5G to trigger final consolidation as Jio and Airtel will lead 5G rollouts. It added that 5G will renew the two telcos’ opportunity with post-paid subs who will lead 5G adoption.

In its statement on Thursday, Bharti Airtel said it would cover all of urban India with its 5G services in 2023 making it one of the fastest roll-outs.

Airtel 5G Plus has three compelling advantages for customers, the firm said. “First, it runs on a technology that has the widest acceptance in the world with the most developed ecosystem. This ensures that all 5G smartphones in India seamlessly work on the Airtel network. Second, the company promises to deliver the best experience – between 20 to 30 times higher speeds than today coupled with brilliant voice experience and super-fast call connect,” it said.

Lastly, Airtel 5G Plus network is expected to be kinder to the environment with its special power reduction solution.

A basic phone you can get for free