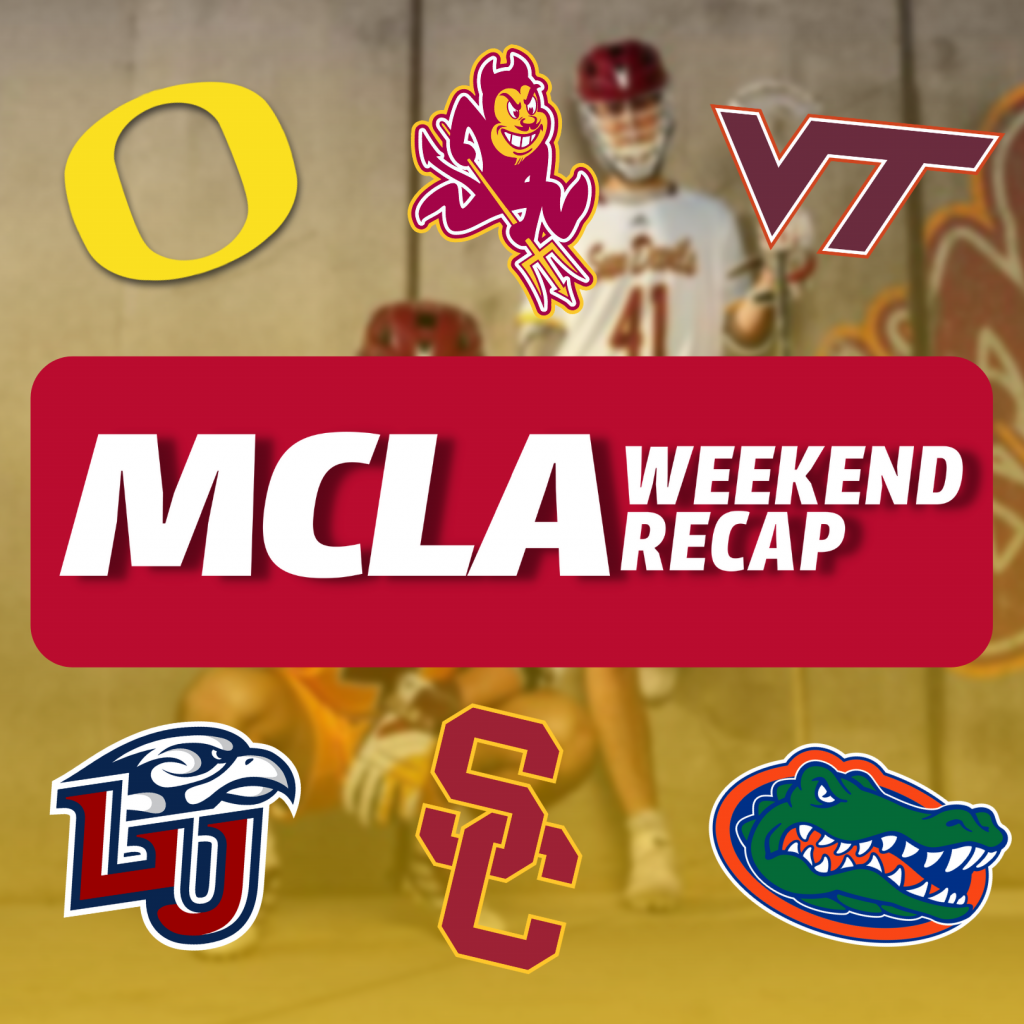 There is no denying that MCLA lacrosse doesn’t receive the amount of coverage that it deserves. In effort to fix this issue, Lacrosse All Stars has partnered up with the Varsity Club Lacrosse team to cover everything MCLA this season.

This coverage will include game recaps, program interviews, and of course gear reviews.

Following up his last MCLA article, Andrew Golden is back getting us caught up on last week’s games.

DISCLAIMER: Each team’s national ranking is based on what it was at the time the game was played and may/are not up to date with the most recent rankings released.

Another huge upset after a crazy weekend of upsets last week. Freshman John Morris gets his first one the season for the game winner off a broken clear. Carson Lombardi (2G, 4A) and Thomas Bingham (3G, 1A) led the offense and Louis Harvey (28S, 76%) made a huge stop on the doorstep the possession before the GWG while Cal was man-up. Santa Clara is now 5-0 and is much better than they’re ranking shows. Cal drops their second straight game by one goal. Golden Bears should be fine going forward and look to bounce back against BC at home on Friday.

Despite the loss pretty impressive for first year program Point Loma to keep it relatively close against a very good, ranked team in UCSD.

Stanford gets their second WCLL win before playing Cal on Friday. Dash Tsai (3G, 1A) and Michael Maffezzoli (3G) lead the scoring. Donnie Schulte has a hattrick for the Seawolves.

Rams continue to prove they’re one of the best teams in DII. Anthony Guarino (5G, 5A) and Charlie White (3G, 2A) lead the scoring for URI.

After upsetting a few MCLA teams themselves, Clemson is on the receiving end of being upset this time. Sun Devils have nine different point scorers in the win led by Jack Rogers (1G, 3A) and Seamus Busby (1G, 2A). Clemson’s offense was paced by Garret Brennan (4G) and John Holcomb (1G, 2A).

Mizzou stays undefeated after this OT thriller. Cam Gosselin (75%) and Joey Ripson (4G) help get the Tigers the win.

Ducks come away with a close PNCLL win to stay undefeated in the conference. Jason Moreta (5G, 3A) plays really well despite the loss.

Cal bounces back after two straight upsets. Offense led by Ethan Deller, Micah Grim, and Jake Pistotnik who all had five points each. Eagles play well after flying all the way out to California for the game.

Auburn gets a big win over an SEC rival. Zach Jones (6G, 1A) ad Lloyd Delatour (1G, 4A) were huge in the win. LSU looks to finish the season strong against all LSA opponents.

Owls get the win in their season opener. Connor Erickson (5S, 83%) plays well for SCSU.

Miami gets their MCLA first win in four years after the program didn’t play for a couple years. Mason Bruning (4G) and Eli Haire (13GB) played well for the Eagles.

Ole Miss wins a close one to move to 2-1, Crimson Tide still looks for their first win.

Denver gets another MCLA win as they prep to join the league next season. Orediggers look to bounce back next week against MSU Denver.

Jake Nolls (2G, 3A) and Carver Ward (7GB) get the Gauchos back to .500. Rhett Farmer and Ryan Foy had two goals each for the Bruins.

Grizzlies get their second conference win thanks to Miles Hess (2G, 3A) and Eric Frazer (3G, 2A).

UCSD stays undefeated in MCLA DII with this win led by Austin Ortel (4G, 3A) and Alexander Franz (4G, 1A). Jack Gandara (6G, 1A) keeps it close for the Banana Slugs.

NC State keeps it close against a very good Liberty team. Reid Koonce (4G) and Alex Duggleby (21S, 62%) played very well for the Wolfpack. Carter Elliot (4G, 1A) and Cooper Branham (3G, 1A) help the Flames get the win.

Western Michigan flies all the way out to Colorado and keeps it close against one of the best teams in the country. Rams move to 4-1 and travel to Texas next week.

JMU improves to 3-1 in their first season in the MCLA. Jack Eschmann (3G) and Alex Gonzalez (1G, 4A) keep it close for the Panthers.

USC gets their 2nd ranked win as part of a four-game win streak. Connor Barnes (2G, 2A) played well for the Pangs.

Tigers get their 5th straight win against a good USF team. Alex Sahli and Joe Ripson each had a hat trick. Kenneth Klubnik (6G, 1A) and Raymond Raefski (13GB) played well for the Bulls.

Bobcats end the Aggies five game win streak over ranked DII teams thanks to Ethan Zwickey (17S, 68%) and Jonathan Serrell (3G). Utah State now has a 20-day break until their next MCLA game against NNU.

Texas Tech gets their first MCLA win after a rough 0-9 start.

Clemson bounces back from their loss to ASU thanks to Coston Pendleton and Garret Brennan who had four goals each. Nick Whittall (2G, 2A) played well for the Lopes.

St. Edward’s stay undefeated in DII. Houston has to wait a month until they play Texas A&M Corpus Christi for their next game. Zach Swartz (5G, 1A, 8GB) played well for Houston.

Mizzou stays undefeated and get their second LSA win. Thomas Hoder (2G, 2A) played well and Dylan Radke had a goalie goal.

Bears travel all the way to Minnesota to get their first win in DII. Jonah Varallo (17S, 71%) and Nic Mathieu (2G, 2A) played well. Jackson Maki (4G, 1A) played well for the Jonnies.

Spartans get their first MCLA win with help from Matthew Hoak (7G, 1A) and pole Brian Teng (7GB, 1G)

Hokies travel all the way to Arizona to pick up a huge win and improve to 6-1 thanks to Aidan Smith (4G, 3A). Arizona has a big one coming up against San Diego State.

Montana State gets their 2nd ranked wins in a row with help from Matt Bless (3G, 1A) and Alexander Brown (1G, 2A). Ben Brandenburger (1G, 5A) and Jeremy Demsher (2G, 3A) played well for NAU.

Alabama gets their first win of the season. Ryan Kerr (4G, 3A) leads the scoring as usual for the Bulls.

UCSD stays undefeated in DII. Nick Krolikowski (4G, 2A), Austin Oretl (3G, 5A) and Austin Weinshelbaum (89%, 14GB) were outstanding for the Tritons.

Unlike the football team, the Cornhuskers lacrosse team did not try and duck out of this rivalry game although it was pretty much the same result. Michael Anderson (3G, 2A) and Connor Jamail (3G, 1A) led the Sooners to victory.

Dukes improve to 3-1. Mountaineers fall to 1-8 although five of the losses were to ranked teams and the other three had a combined goal differential of four. They look to get back on track against Temple in two weeks.

Tulane led by Joey Fitzgerald (2G, 2A) and Jonathan Rosenstein (2G, 2A). Aggies led by Connor Cooper (2G, 3GB) (although it says 20G on the MCLA website which is kinda cool for him).

After going 0-3 to start Chapman gets back-to-back upsets with the help of Liam Nelson (3G, 1A) and seven other point scorers.

USC improves to 5-1 and looks to keep moving up in the polls. Sonoma falls to 1-5 although three of the losses come from ranked teams and the other two were against very good unranked teams.

Gino Pagliaro (19S, 76%) was great in net while Max Lucas, Nick Eliacin, and Zach Schenken all had hat tricks. Spartans did a good job of stopping top FOGO Aaron Piszczek (36%).

Owls show why they are the number two team in the country. Brian Baumann has the lone goal for UNF.