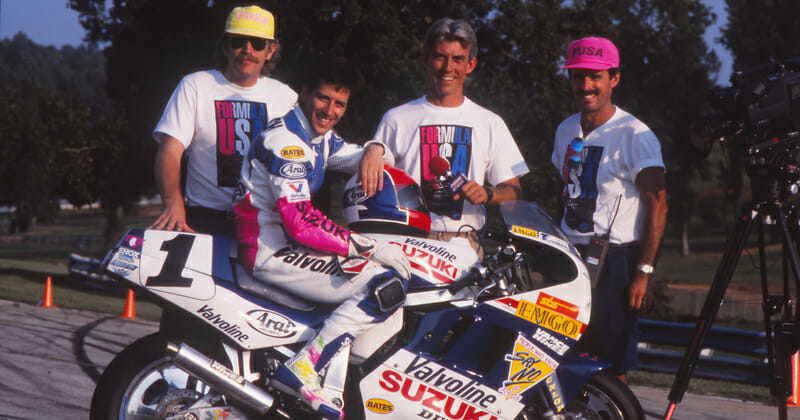 A Camera and a Dream

No one thought it could be done, but a small group of dedicated enthusiasts, headed by filmmaker Paul Winters and former AMA Superbike racer and author Keith Code, managed to put the WERA Pro Formula USA Series on national television. It was 1990 and Formula USA was going into its second year. Willow Springs Raceway’s owner Bill Huth launched Formula USA at his track as a run-what-you-brung motorcycle road-racing class and some interesting machines participated in the Willow Springs championship, but when WERA Pro took the series national in 1989, things really exploded. There was a crazy mix of motorcycles, from 250cc two-strokes to Suzuki GSX-R 1100s breathing nitrous oxide. As Huth so succinctly described the rules of F-USA in the opening national TV broadcast of the series, “They have to run gasoline and they have to have two wheels.”

The no-holds-barred machines of Formula USA drew fans almost immediately. First of all, Formula USA was a catchy name, and it didn’t hurt when Kenny Roberts got into a dispute with the AMA and pulled his team over from that series to Formula USA, bringing along his sponsor Marlboro and its promotional juggernaut with it. F-USA was managed by a young and aggressive staff led by Doug Gonda and WERA’s Evelyne Pritz (now Clarke) that promoted the races with vigor and enthusiasm. Thanks to a strong PR effort, Formula USA almost immediately was featured in newspapers, TV sportscasts and radio stations across the country. The Associated Press ran results and a short story from each round and USA Today regularly featured the series, none of which was happening on a regular basis in AMA Superbike.

Then when it was announced that the series was getting national television, there was even talk inside the industry that F-USA might battle the AMA for control of road racing in America. A few of the factory AMA Superbike teams took notice and began participating in select rounds against the established F-USA teams, further deepening the credibility of the series

“It’s hard to fathom now just how big getting a national TV deal for the entire series was at the time,” said Doug Gonda, whose company Protac was contracted to promote the series. “It shook things up and caught the industry by complete surprise.”

The key person who had the vision of getting F-USA on TV was a young filmmaker and racing enthusiast named Paul Winters.

“I’d been hired by Keith Code to produce a video version of his famous book A Twist of the Wrist,” Winters explained. “I’d been a motorcycle rider since I was a kid but doing that project with Keith really got me involved with road racing in a bigger way.”

And with Formula USA, Winters saw, what to him was an obvious opportunity, to get the racing series on TV across the country. Since Winters was in the movie and TV industry, he was early to see a major evolution in cable TV that others hadn’t quite noticed yet.

“What was happening was all of these regional cable sport channels were being brought together to share content across the country,” Winters said. “The company doing that was called Prime Network. I knew about distribution, and I knew that you could get cable TV time. So, what you did was get a 46-minute show and you got half the [ad] spots.

“Keith and I formed a partnership, and we went to Century City where Prime’s headquarters were, to pitch putting motorcycle road racing on their network and literally at the pitch meeting they said, ‘Yeah okay!’ I mean they were enthused about getting a national motorcycle series on Prime.”

Code and Winters were almost stunned at how quickly and easily the TV deal had been put together. As it turns out, getting a regular time slot on Prime was the easy part. What they then faced was the daunting task of putting together a production team, selling advertising and getting ready to launch the program on Prime.

“We didn’t have much time to put this together,” Winters recalls. “We literally sat down together, and we each had a list, and we start calling all the companies we could think of in the motorcycling industry. Fortunately, Keith had been in the industry a long time already and he knew a lot of people, so that helped. We started selling advertising packages.”

The untold story almost no one knows about Winters and Code’s TV endeavor was, according to Winters, initially they went to the AMA to see if they wanted to have the AMA Superbike Championship featured.

“But they just blew us off,” Winters recalled. “They didn’t actually believe anyone could get a complete road racing series nationally televised.”

The AMA had a couple of its Superbike races broadcast on TNN’s American Sports Cavalcade, so perhaps there were conflicts and existing contracts that kept the AMA from entering the Prime Network deal. So that’s when Code and Winters turned to Formula USA.

“We didn’t have to pay to be nationally televised, I think contractually all we had to do was give them some signage at the races,” explained F-USA’s Gonda. “It was a no-brainer for us.”

Winters said it was fine that they did the deal with F-USA instead of the AMA.

“But they just blew us off. They didn’t actually believe anyone could get a complete road racing series nationally televised.” ~Paul Winters

“I mean you had those incredible unlimited machines, and it was all about the riders and the tuners,” Winters said. “And you had this local Willow hero Chuck Graves going up against the goliaths like Marlboro Roberts and the Valvoline Suzuki team. There were a lot of compelling stories. It made for great theater, and we played up the personalities. That TV series made heroes out of those guys.”

One example of that was casting riders in certain rolls. It was the storyteller in Winters coming out on the broadcast. And they didn’t have to make it up, they just emphasized and focused on riders’ personalities and encouraged rivalries and outlandish quotes. Scott Gray, for example, was cast as the cocky, fearless, big blond conqueror astride his ultra-fast punched out Yoshimura Suzuki GSX-R1100. And that was, in fact, Gray to a tee. When they asked Gray what he had to say to the other riders before the race, his reply was pure central casting, “They’d better watch their girlfriends,” Gray said with a sly grin.

With time, effort and sheer youthful passion, Winters and Code secured advertising and assembled a crew of cameramen and they started covering the F-USA races. The first race to launch the national broadcast of the series was almost a complete disaster. It was in April of 1990, at Willow Springs Raceway and the high desert winds that weekend were relentless. Video cameras were getting gummed up and microphones ruined by the blowing sand. Even on sturdy tripods, the cameras shook in the 60-mph gusts. It wasn’t pretty in that first race, but Formula USA went national that summer of 1990, and the more the crew worked together, the better the shows got.

Putting the programs together was a crazy flog for Winters.

“We couldn’t afford a switching truck, like the big boys use,” Winters remembers. “So, I would try to find the highest vantage point where I could see the most of the track. And I had a radio to all the camera guys and would tell them what races were developing. I would key up and say, ‘Shoot number two, he’s about to come to your corner.’ And some were better than others at capturing the right bikes. You never knew what you had on tape until afterwards. I would take all the tapes from the race and off-line edit it and then take it to a studio and do online edits and it was expensive. It was probably $200-250 per hour studio time, and you’d be in there for a week.

“And the most expensive part was the travel for the camera crew, paying them their day rate of three or four hundred apiece, renting long lenses, replacing cameras that got thrown off a bike or something, the amount of Beta tape we used wasn’t cheap either. Combine all that and producing these shows cost in the hundreds of thousands.”

Sometimes the editing would go right down to the wire. Once Winters was so late that he hopped on his motorcycle and rode like a demon to deliver the tape to Prime Network just minutes before the program was to air.

The national F-USA coverage lasted just two years. Winters was too busy to worry about protecting what he’d done, he says, but others were taking notice. And the AMA was not happy that this upstart series was making such a big splash.

“So, what happened was another group went to Prime with the AMA Superbike Championship and sort of stole our deal out from under us,” Winters said. “It was tough at the time, but we were pioneers and did something that made history and that was it. I went back to movie making.

“I was proud of what we accomplished, and that F-USA broadcast back in ’90 and ’91 really opened the doors and made a path for motorcycle road racing to be on American television.” CN

Click here for all the latest Road Racing news.