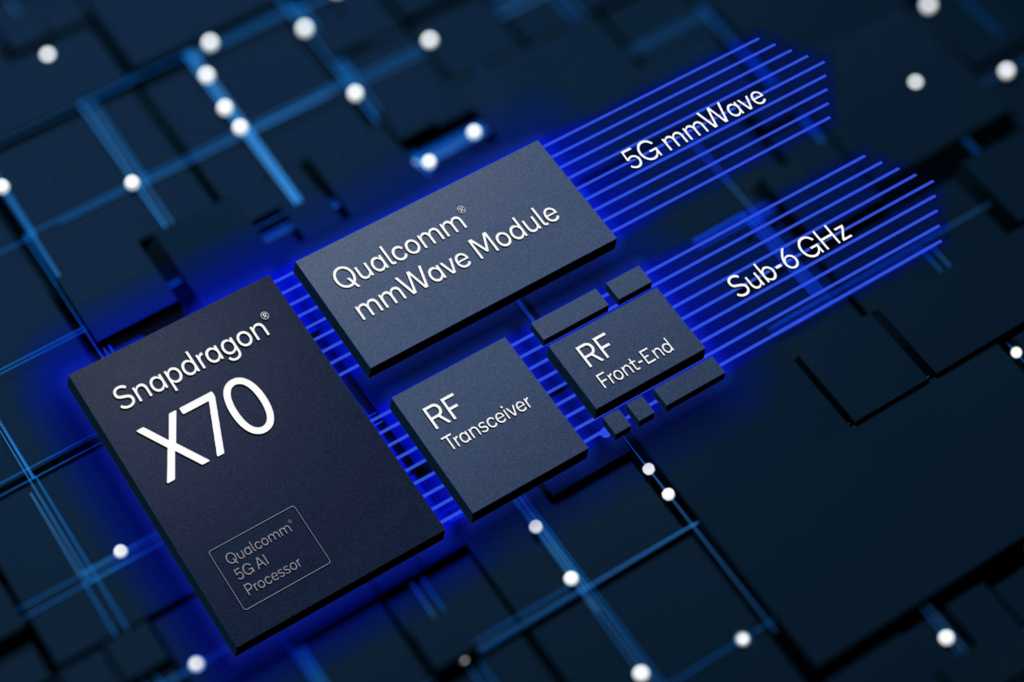 As it often does around this time of year, Qualcomm announced its latest and greatest 5G cellular modem. The Snapdragon X70, as it is called, is the successor to the Snapdragon X65 and promises higher real-world bandwidth, lower power use, and lower latency. The highlight is a built-in AI processor that will dynamic, real-time optimizations to improve connection quality.

We don’t expect any phones with the Snapdragon X70 until early in 2023, and the first iPhones with the modem system should be the iPhone 15 in the fall of 2023. What’s more, Apple has been working on designing its own cellular modems for years, and 2023 might be the first year it’s actually ready for market, putting the two modems on a collision course.

Snapdragon X70 is all about AI optimization

The high-level specs of the X70 modem sound a lot like the X65: It supports 3GPP Release 16 with speeds up to 10 gigabits with extensive band support and multi-channel carrier aggregation. The big breakthrough this year is the inclusion of an AI processor that adds three new AI-based optimizations: channel state optimization, millimeter-wave beam management, and network selection.

In other words, the Snapdragon X70 is going to use AI that runs on a built-in processor within the modem to get a more stable and robust connection, which should improve real-world speed and power use.

Beyond the AI stuff, the Snapdragon X70 supports a laundry list of modem features, including standalone millimeter-wave support, dual-sim dual-active 5G, and 4x carrier aggregation. These aren’t really important to the U.S. market just now, but products with these modems are still a long way away, and these features have more utility in other markets around the world.

Will the iPhone use the Snapdragon X70?

While Qualcomm says the first products with the X70 will appear at the end of this year, the iPhone 14 almost certainly won’t be one of them. Apple’s development and testing process are far too long for that. Most high-end Android phones won’t have this chip until 2023, in fact.

But could it appear in the iPhone 15? If Apple once again uses a Qualcomm Snapdragon modem, then it seems likely. But Apple has been working on its own cellular modem for years. It settled a protracted legal battle with Qualcomm back in 2019, which included a six-year patent licensing agreement (with a two-year extension option) and a multi-year agreement to license entire chipsets. Apple also bought out the majority of Intel’s struggling modem development business that year.

A recent report from DigiTimes said that Advanced Semiconductor Engineering is in preliminary talks with Apple for “backend orders associated with the vendor’s first self-designed 5G modem chips set for use in 2023.” That could mean Apple is moving toward its goal of dumping Qualcomm’s 5G modem, with the iPhone 15 being the first device to showcase Apple’s own chip.

It was always expected to take several years for Apple to make its own competitive 5G cellular modem. By 2023 (when we would expect the Snapdragon X70 to first appear in the iPhone) we will be four years past the Qualcomm settlement and acquisition of Intel’s modem business. If Apple doesn’t have anything to show for it by that point, it’s probably time to start asking questions about whether it ever will. And if it doesn’t, the X70 will almost certainly be the one inside the iPhone 15.

I have written professionally about technology for my entire adult professional life – over 20 years. I like to figure out how complicated technology works and explain it in a way anyone can understand.