A much needed improvement – The Mobile Indian 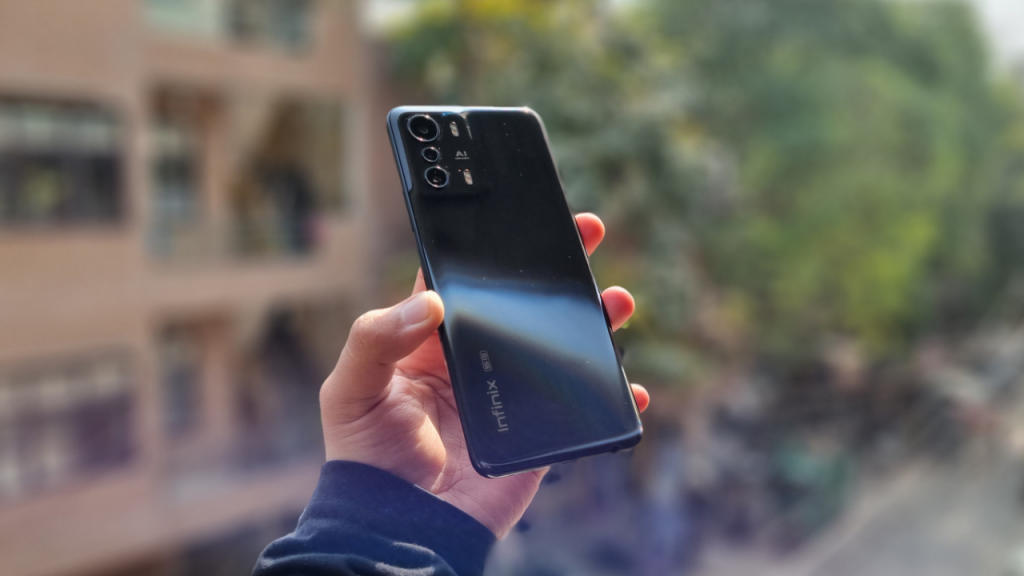 Infinix has been one of those brands trying hard to make its own place amongst the consumers in India. Realme, Oppo, Vivo, & Samsung seem to be its biggest competitors in the segment in which Infinix generally launches its smartphones. The brand seems to upping its game with the launch of its newest Infinix Zero 5G.

The Zero 5G from Infinix comes at Rs 19,999 for its single 8GB + 128GB variant. However, the on-paper specifications include some of the first in its segment, such as a Dimensity 900 SoC. The Reno 7 with this SoC is priced at Rs 28,999. Infinix’s main competitors in this price range include iQOO Z5, Vivo T1 and the recently launched Realme 9 Pro. Does Infinix Zero 5G prove to be better than its alternatives? Let’s have a look.

Infinix has tried to keep the design of the Zero 5G unique in its segment. It also seems to be inspired by the Oppo Find X3 Pro launched last year ,where the back panel curves to form the camera array and isn’t separated from the back panel. However, it is made of plastic and is reflective and a fingerprint magnet.

The black variant we got can get a lot of fingerprints so you are better off with a case on it. As for the build quality, it does look premium but doesn’t feel so. This is because I could notice the back panel pressing a bit into the phone. It isn’t very noticeable in daily usage but definitely feels cheap. Then there’s a fingerprint sensor on the right which doubles as a power button as well. The fingerprint almost instantly recognizes the finger and is very quick to unlock the phone.

There’s also a volume rocker on the right, with a Type-C port, a speaker grille and a 3.5mm headphone jack at the bottom. The speaker sounds pretty average but is loud enough. Apart from that, the phone is light in hand, weighing 199 grams and is slim.

We also had the Vivo T1 with us, which costs Rs 15,990 and in our opinion, it had a better build than the Infinix Zero 5G. On the other hand, the Realme 9 Pro also looks decent in terms of looks, but as we haven’t held the device in hand, we can’t comment on its build quality. As far as looks are concerned, we would prefer the Infinix Zero 5G, but Vivo T1 5G seems like a better choice for build quality.

The Zero 5G has a 6.78-inches IPS LCD screen with 120Hz refresh rate support, 500 nits of max brightness, and a 1080 x 2400 pixels resolution. The screen is big, and the colours look very good. They are vibrant and accurate. However, the display doesn’t get as bright as it should for easy readability under direct sunlight.

The Infinix Zero 5G gets a lot of things right when it comes to performance, as it gets some flagship-level internals that we generally don’t find in this segment. This includes LPDDR5 RAM and UFS 3.1 storage, providing a faster user experience overall. The Dimensity 900 powers the Zero 5G, and it doesn’t lack behind in terms of performance.

The Vivo T1 and the Realme 9 Pro have Snapdragon 695 under the hood, which is very similar to Dimensity 900 in terms of performance. Daily usage with Infinix Zero 5G was fine and smooth without any problems, while RAM management was decent as well. You also get the virtual RAM feature where you can use up to 5GB of your internal storage as RAM. The Infinix Zero 5G runs on XOS 10 based on Android 11 and the company has confirmed that the device will receive Android 12 in August this year.

We have stated time and again in the past about why we dislike Infinix’s software, and this time, Infinix seems to have improved a bunch of things but still isn’t able to match up to the standards with the likes of FunTouch OS, or Realme UI. The animations in the software were choppy, and to add further, the device was having the November Security patch.

Moreover, there’s a bunch of bloatware including apps like Moj, MX and TakaTak. Further, the stock apps such as the XOS launcher kept sending weird notifications which I never signed up for. Fortunately, some of these apps are uninstallable so you can get rid of them as soon as you set up your device.

On the better side of things, the user interface has changed for the good. The icons and animations are better than what they were before. There’s a new iOS App Library-like folder style that groups apps and shows them in a grid of 2 x 2 on the home screen.

There are new widgets and some settings now have grid-style options. Features such as Game Mode, Smart Panel, Video Assistant are all present. There’s a Social Turbo feature using which you can change your voice while on a WhatsApp call or save the status of your friend to your internal storage.

The features are great but the UI, update strategy and animations take away the fun. Where most of the OEMs have updated their smartphones to Android 12, Infinix will bring it almost 6 months from now. Lastly, you can expect decent gaming performance with games such as RL Sideswipe. However, games such as Call Of Duty run fine only with medium to low graphics. But with Vivo T1, Call Of Duty ran much better with higher frame rate stability and smoother gameplay. The same should be the case on Realme 9 Pro as it has the same processor as Vivo T1.

The Infinix Zero 5G is backed by a 5000mAh battery with 33W fast charging support, The device performs similar to how other devices perform in this segment in terms of battery. The 5000mAh cell can last more than a day with moderate usage including light gaming, watching videos, browsing and chatting. It got me a screen-on time of more than 6 hours which is again, very decent. The 33W fast charger can charge the device from 10 to 100% in about 80 – 90 minutes.

The Realme 9 Pro also has a 5000mAh cell with 33W fast charging while the Vivo T1 also gets an identical battery capacity but with a slower 18W charging. This means that Infinix Zero 5G is as good as its competitors and even better than some, in this department.

The Infinix Zero 5G sports a triple camera setup on the back including a 48-megapixel f/1.8 wide primary sensor, a 13-megapixel f/2.5 telephoto sensor and a 2-megapixel depth sensor for accurate portraits. On the front, there’s a 16-megapixel sensor with f/2.0 aperture. The device misses out on an ultra-wide sensor which is a much more practical one than a depth sensor.

The camera app though, is the same as before where it still calls the normal photo capturing mode as AI Cam, instead of just being labelled as Photo. There’s a Pro mode which one can use to dive deep into photography and set the characteristics of a photo themselves. You also get Document, Slow Motion and Panorama modes if you ever need them.

Talking about cameras, the main sensor takes decent photos in sunlight with good details and sharpness. The colours stay natural but sometimes look washed out depending on the scene. A 2x zoom doesn’t affect details which is a good sign and the photos still look as good as from the main sensor.

The 2-megapixel depth sensor does a good job of accurate edge detection and providing a nice bokeh. While the colours are still natural, you also don’t miss out on detailing and sharpness. Indoor photographs are also decent under artificial lighting with above average sharpness but vibrant colours.

Under low-lighting though, the camera does struggle to keep up the details which result in a smudge effect. However, the colours remain intact and still look good enough. Selfies were good enough and had decent details. However, the colours could have been improved as they look washed out in some scenarios. Night shots were below average when it comes to colours and sharpness. The water colour effect took over the photo. Turning on night mode didn’t make much of a difference but only brightened up the photo by a few notches.