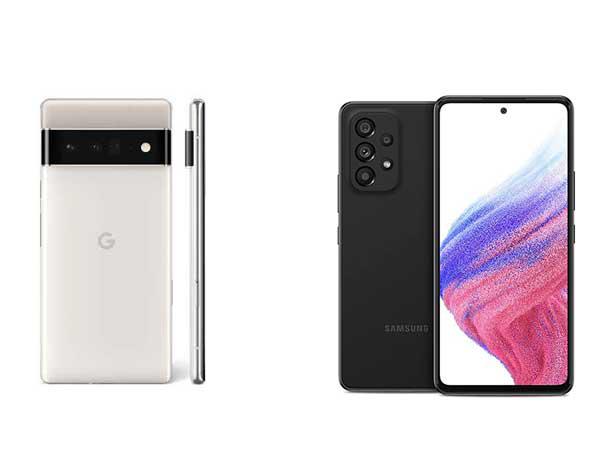 People expect top-of-the-line specs when talking about flagship devices from the world’s top mobile phone makers. But as phone specs level out as technology hits its top line, more mid-range phones are offering top features at a better price. Consumers love the latest and greatest. They also love a deal.

Google Pixel 6 and Samsung Galaxy A53 5G deliver plenty in the way of value and features to make the most discerning tech geek happy. With similar price points and a variety of features, there are plusses and minuses to both options. Camera differences, upgrade options, accessory availability and build quality all come into play when examining these phones side-by-side.

The Pixel 6 was released in October 2021 and while it’s a bit more mature than the newly released Galaxy A53 5G, that should not dissuade consumers from examining these great phones on equal footing. In a blog post at its release, Google’s Brian Rakowski, vice president of product management said the Pixel’s lineup is powered by the Google Tensor, “a mobile system on a chip designed specifically around Google’s industry leading AI.”

Samsung also touted its “brand-new processor, coupled with Galaxy’s AI camera…” TM Roh, president and head of Samsung’s mobile business, said in a release, “With the latest Galaxy A series release, we’re making it easier than ever to enjoy Galaxy’s advanced, innovated mobile experience at a great value.”

CRN takes a pound-for-pound look at these two mid-range brawlers.

These phones have nearly identical dimensions. The Google Pixel 6 is 6.2 x 2.9 x 0.4 inches, while the Samsung Galaxy A53 5G measures 6.3 x 2.9 x 0.3 inches. Both phones feel very similar in the hand. The Pixel 6 is 7.3 ounces, giving it some balanced heft that outweighs some other phones in its class. But that’s more than manageable if you eat your spinach. If not, the Galaxy A53 5G will give those puny biceps some relief at an easy going 6.6 ounces. But read on to find out if the Pixel 6 is worth doing a couple more reps at the gym…

Both of these screen experiences are excellent. Google Pixel 6 has a 6.4-inch OLED with 2400 x 1080 resolution and 90Hz refresh rate that will give you a fantastic and smooth viewing experience and the Samsung A53 will keep your attention with its gorgeous 6.5 FHD+ Super AMOLED 120Hz display. The differences are negligible, but Samsung’s tech is coveted in the display arena for good reason, so we’ll give them the slight advantage here.

Samsung has let it be known that they want to dominate in the photographic department of mobility and the camera offerings here back up the big talk. On the rear side, the A53 sports four cameras: an ultrawide 12 megapixel with f2.2 aperture, a 64-megapixel main camera with f1.8 aperture ability and optical image stabilization, two 5-megapixel lenses covering depth and macro settings at an aperture of f2.4. On the front side, you get an unreal 32-megapixel f2.2 lens.

Google’s Pixel 6 cameras, while lacking that impressive amount of firepower, also offer some serious shutterbug potential. The two rear cameras include a 50-megapixel wide camera with f1.85 aperture, a 12-megapixel ultrawide with f2.2 aperture. They are laid out in the center of the phone body, instead of the top corner, which users seem to like. The front camera provides an ample 8-megapixel f2.0 aperture fixed focus camera.

Samsung has to get the nod here for camera dominance. The Samsung A53 sports four cameras.

Google Pixel 6 promises 24 hours-plus of battery life with its 4524 mAh battery, but claims Extreme Battery Saver model will give up to 48 hours. Reports say the Pixel 6 really falls down in the battery department and does not live up to its advertised span. The phone supports fast charging with Google’s (insert “arrrrrgh” here) sold-separately 30W USB-C Charger. Seriously, why not just include the quick charger here?

The 5,000 mAh battery on the Samsung A53 offers up to 2 days of power and by all accounts, it’s been living up to that hype. It supports 25W fast charging (of course, with a wall charger sold separately again).

We think the Samsung is the clear winner here based on value and spec upgrades. Google’s Pixel 6 is a really fantastic phone that shows the company is willing to go toe-to-toe with Apple and Samsung. But it’s just a hair behind in the race.