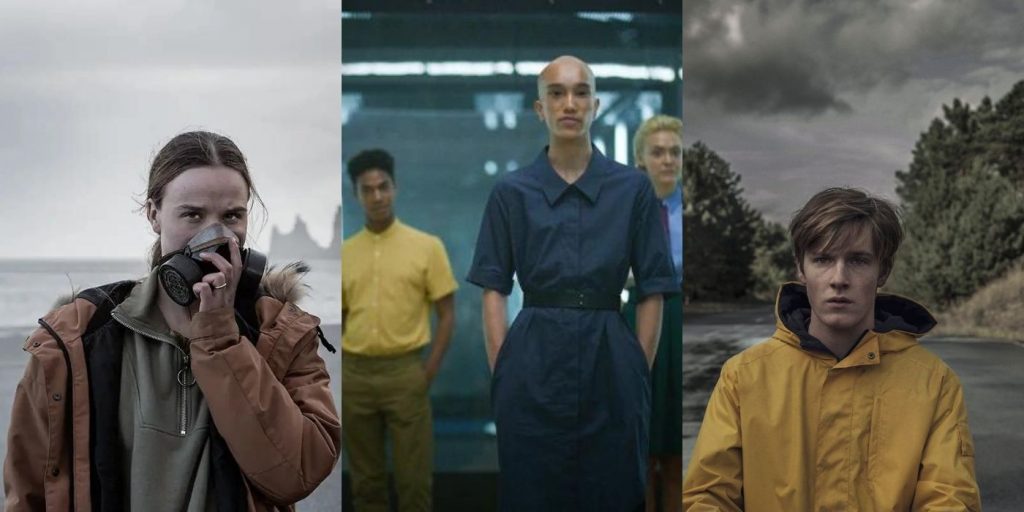 There has been a recent push to make shows made abroad available to US audiences. This movement has seen Netflix at the forefront of making many of these incredible non-English shows available to Americans such as Babylon Berlin, Elite, and Lupin.

Streaming services are seeing a surge in well-crafted science fiction series made abroad. Though the majority are found on Netflix, other streaming services are catching on. Even Disney! This is a list of some highest-rated dubbed and subtitled shows currently streaming that demonstrate a huge variety of original shows from around the globe.

Decades after World War III, Spain is still suffering from radiation and famine with the haves separated from the have-nots by a wall. This dystopian drama revolves around a family in Madrid divided by that barrier and their struggle to reunite. Much of the story draws from Spain’s real-life dictator, Francisco Franco.

The ensemble cast includes some fantastic actors including Unax Ugalde (Love In The Time Of Cholera, Goya’s Ghost) and Ángela Molina who has appeared in several of Pedro Almodovar’s films. As a parable about life after war, this show not only delves into human suffering but also looks into some unique parts of Spanish culture.

Beautifully shot, this mystery from Iceland feels exotic. One year after Katla erupted, a small town at the foot of the volcano is nearly empty. When a woman is discovered naked and covered in volcanic ash, people begin to worry. She appears to be the younger version of someone they recognize.

The slow-burn series is magnificently filmed and unique in its storytelling. The acting is superb and engaging. This show incorporates Icelandic legends and reflects on the themes of isolation, grief, and regret.

A group of teenage best friends who live in a small town in the mountains is focused on all the stereotypical challenges—bullies, first kisses, homework—when they are accidentally separated by a science experiment gone wrong. At first glance, this looks like one of Disney’s great live-action shows, but as it progresses finds some wonderfully dark plot points and themes.

Disney+ has carefully hidden the fact that this series is a French production by having it automatically start dubbed. Now that Disney includes Star Wars and Marvel, it seems to be broadening its content. This series is a pleasant surprise with unexpected turns and a blend of thrills with mystery.

This Belgian production for Netflix takes place after an apocalyptic event makes the sun’s radiation so deadly that people must avoid it. A plane full of survivors rushes from city to city to stay in the night’s darkness. With a magnificent ensemble cast of diverse characters, the series keeps the tensions high.

Like The Walking Dead, Into The Night has nonstop thrills and surprises while the real danger is other people. This show has been popular enough to already have a second season with a spin-off in production.

Abyss (aka Eobiseu) is one of Netflix’s many K-dramas. This particular one blends in a light-hearted romance about two people who are in separate accidents only to wake up in new bodies thanks to a mysterious orb. Mix that with a serial killer and let the hijinx ensue as they begin to realize the possibilities with their new looks.

The two main characters played by well-known actors have great chemistry and are highly entertaining. This show is truly unlike anything on the list. This series is a fun entree into Korean shows, of which there are many to explore.

3% takes place in Brazil’s near future where young people from Inland, an area of extreme poverty, must complete ‘The Process’ — a series of deadly challenges — in order to make it to Offshore, an elite society. Only 3% survive The Process.

Though this dystopian drama has been compared to others like The Hunger Games, its solid reception was principally because of the strong character development. The series has four seasons. Many find this to be a great starting point for Brazilian shows and highly bingeable as well.

This show is in no way connected to the Marvel universe. Ragnarok is a Norwegian series based on Norse mythology where young adults are confronted with sudden extreme climate changes. These teens –realizing that they are reincarnations of Norse gods — must fight to stop the catastrophic events.

With two seasons available and a third and final on the way, this show has done well for Netflix. Norway is a gorgeous backdrop to a unique take on modernizing mythology and heroes. The show is not a Hollywood production and is MA for a bit more mature content.

Based on a manga by the same name, this precursor to Squid Game takes high-stakes games to a new level. Stuck in a mysteriously abandoned Tokyo, Japan, participants are observed and judged by a mysterious something or someone in the sky.

Visually stunning and graphically violent, Alice In Borderland will keep the viewer on the edge of their seat. Fans eagerly anticipate the second season which arrives this year and many theories about what will happen are floating around the internet. This is a definite must-watch.

With shows like Money Heist and Veneno, Spanish television seems to be hitting a golden age. This action/adventure is certainly part of that exciting era. A team of three people from three different decades joins a secret department in the Spanish government to help stop the bad guys from changing history.

With four seasons to binge, this highly addictive series takes a trope Americans have seen in many forms and makes it uniquely Spanish. Even for those unfamiliar with Spanish history, this well-written, witty series is very engaging.

Dark is a spectacularly complex and mysterious series about the interconnections among four families in a small German town where children have gone missing. An eerie cave hidden by the forest both entices and frightens the townspeople, especially the kids. What at first seems like a murder mystery soon becomes much more.

With three complete seasons, Dark‘s stunning cinematography and intense acting will keep any viewer glued to the screen. It’s no surprise that the award-winning and critically-acclaimed sci-fi noir series is ranked #80 in IMDb’s Top 250.

Next: The Best Sci-Fi Movie In Each Of The Last 10 Decades, According To IMDb

The Gilded Age: Why Gladys Can’t Enter Society (But Bridgerton’s Daphne Could)

Jeffrey Oaks joined Screen Rant as a freelance writer in 2022. He is the author of the award-winning novel WHY I FIGHT (Simon & Schuster) and has been published widely. Oaks lives and writes in Chicago’s Logan Square neighborhood. He is currently finishing his second novel while in constant search for the ultimate empanada.